WE WON GEORGIA!!! 💙🍑 SENATE FLIP IS THE POWER OF THE PEOPLE

🎉BIG SHOUT OUT🎉 to the CASA in Action Canvassing Team

January 6, 2021, Atlanta, Georgia – CASA in Action’s 62 canvassers, hailing from Georgia and as far away as Pennsylvania, Virginia, and Maryland, produced more than 50,000 on the ground engagements with voters to bring home the victory of Senate control. With Reverend Warnock’s seat secured and Jon Ossoff the projected winner, CASA in Action contributed to the coalition that knocked on the door of every Latino voter in the state.

“In November CASA in Action mobilized in Pennsylvania and Virginia to win the White House; flipping the Senate is the crowning jewel in our year of nonstop victories,” said Alonzo Washington, CASA in Action executive director. “Immigration reform and police reform are the top priorities for our members and the reason why sending our all-star team down to Georgia was critical. Now Congress can protect Latino and Black communities with comprehensive legislation and undo the four years of trauma and damage from the previous administration.”

CASA in Action’s robust express advocacy door knocking campaign engaged with Latino, immigrant, and Black voters in Fulton and Henry Counties. Experienced campaign staff who just helped to win the presidency traveled from homestates of Pennsylvania, Virginia, and Maryland into Georgia to start knocking doors, tripling the size of the team with motivated and local canvassers of color. Pandora audio, video, and display ads and organic social targeted Latinos in the state for a reach of 1,556,028.

Experienced lead canvasser Meliqua Heath from Hampton Roads, Virginia, said: “We talked to a lot of Latinx people who thought their voices don’t matter and encouraged them to vote. But we see now that’s not true. I am Puerto Rican and Black. Change for Latinx communities is going to happen. Change for Black communities is going to happen. I knocked on I don’t know how many doors to flip the Senate for change to happen for all of us. I never thought I would be out in Georgia to push for Rev. Warnock and Jon Ossoff – I am honored to be here from Virginia. I am really excited to know that we are going to win these two seats.”

The largest immigrant electoral mobilization organization in the Mid-Atlantic will continue ramping up, preparing for Virginia’s governor and lieutenant governor races. CASA in Action recently endorsed Jennifer Carroll Foy for governor and Elizabeth Guzman for lieutenant governor. Also endorsed Candi King won yesterday’s special election for Virginia’s District 2 to become one of the newest Representatives in the House. 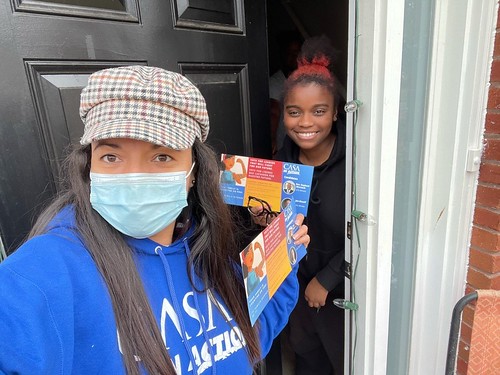